It was AAA Donkey Driving Road ASSistance to my rescue today!  I over tweaked harness and had to unhitch, fix and rehitch on a gravel road!  My wonderful neighbors came on the run to help!  Thank you Jerry and Judy… you saved our drive today!

It was Merlin and Marshall’s day.  Spent a lot of time readjusting Merlin’s back strap that was hooked up wrong.  Once the strap was moved to the correct ring his breeching was too long and needed shortened.  It’s been that way for over a year.  When I took the spreaders off I could see it was not configured correctly.  I remember shortening the breeching last season which at the time I thought was very odd!  That is probably what caused his collar sore last year.

Marshall’s problem was that everything underneath was too tight and once hitched he had no room to move!  Now with these corrections we may try the Gig again later and see how it goes!

This was only their third hitch together so they are still going only four miles or less.  Marshall is afraid of the tall roadside grass waving in the wind.  I need him to be able to move over when we meet traffic.  I tricked him a few times and as soon as he realized I had moved him to the side of the road he was definitely unhappy.  For now Marshall is going on the traffic side and Merlin is going on the ditch side.  Marshall being a city boy should be able to handle most of our traffic!

Today we drove in our hay field that had the crop in windrows.  Marshall got to see the machine shed, the pond, bee hives, the neighbor’s horses and cattle all in the same drive!  He had to exit the field next to a portable welder that was being used to work on a piece of equipment.  He couldn’t decide which to spook at first… by the time he made up his mind we were past and going down the road!~

Work and weather is going to delay our next outing.. it will be a wait and see game!  Stay tuned!  The GoPro failed us again, since I thought it was working I didn’t pull out the camera and take any photos.  Here is one I took a few drives ago of a beautiful homestead that was a long way from where we were, another long distance shot.  Looks like a nice place to live to me! 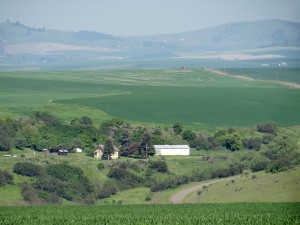