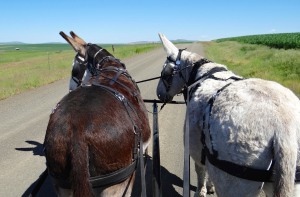 Deer crossed the road in front of Luc and Galahad who were too busy doing important donkey stuff to see them…It happened right in front of us and on the skyline, too! I figured they would be long gone by the time we arrived… oh was I wrong!  The canola field they ran into is somewhere around 5 to 6 feet tall.  It was Galahad who was the first to spot the larger of the two jumping thru the canola right next to him.  WHOA… WHERE DID YOU COME FROM?  Then he spotted the smaller one.  The first one ran across the road in front of us, making the boys about 10 foot tall and ready to bolt!  We watched the first one run about a mile across a wheat field.  The second one just disappeared.  I have a feeling it was a fawn who laid down and hid.  Poor Galahad he just stood there until he was sure it was safe to travel once again!  He never did quit looking for the second deer!

We drove six miles in 2 hours and 25 minutes and when we arrived home the boys were hitched to the Pacific Gig and we moved it to a new location out of my way.  It goes to the welder next month to have the pole flipped over so the line of draft will be about four inches lower than it is now.

I removed the line spreaders and that took care of the problem of Luc wrapping the inside line around the neck yoke, then jerking his head up to let me know he was in trouble and we needed to stop…right now!  They really did not need them on the two wheeled Pacific Show Cart, I also took them off the other team’s harness.

The Go Pro camera was a NO Go today so you are without video, maybe tomorrow I can coax it into working!  It will be Marshall and Merlin tomorrow on the Pacific Cart, that should be fun!

These photos were taken on our last drive so the line spreaders are still in place.  Click on both photos to bring them up to full size.