2014 is Teamdonk’s year to achieve the allusive1,000 Logged Driving Miles.  Unofficially that lofty goal has already been obtained, but what I want to see is that distance officially logged from the start date of July 6, 2006 until  the day in 2014 when our goal happens.  All the times and distances have been successfully obtained thru several Garmin GPS monitors and more recently backed up with the Run Time App on my smart phone plus another person, beside myself, recording Teamdonk’s time and distance.

Lately I’ve been thinking about all the different vehicles and the driving donkeys, that have led us to this destination.  First the carriages.  I started off with two, a metal cart and a red and black four wheeled antique coal box buggy with a few features that I never did like.  That little metal cart was soon replaced with a brand new Pacific Carriage Gig with a suspended line of draft, which is an amazing vehicle and to this day a favorite for the taller team.  A  ten foot Robert’s Wagonette became the vehicle for Dev and Liberty to pull, but proved to be too heavy for our steep prairie roads. This vehicle was replaced with a new Robert’s Trail Buggy that was later set up for three and four abreast driving and has proven to be a fun reliable vehicle.  Then it was back to Pacific Carriage, this time to add a new Show Cart which soon became my all time off road field driving favorite for the 56 inch singles and teams. Later we added a beautiful two seater buckboard for parades.  I am hoping to turn that buckboard into a wagon for trail drives this year, anyone in need of this beautiful vehicle?

My very first Donkey drive was with Luc in July 2004.  At that time he was in Driver’s Ed Training in Hamilton, Montana with Jack and Helen Eden.  Luc, myself and Jack  went cruising around the neighborhood shortly after Luc began driving as a single.  We used the harness that Janelle Reiger, Luc’s breeder, had made and that I continue to use to this day. I had taken it apart and when I put it back together I accidentally switched the trace carriers, also known as lazy straps, with the shaft holders.  On our way back the lazy strap came apart and one of the shafts on my first little metal cart was unsupported, as I remember there was some baling twine involved in getting us safely home. Luc took it in stride and we made it home just fine before the other one came apart also.  They were meant to support the traces not carry the shafts!  That was extremely lucky!

Luc’s next drive with me, was about a month later just before we brought him home, that drive took place in a parade with Jack riding along beside me for moral support.  I guess he figured if we could do a parade together we could make it as a driving team! This photo was taken about a year later with Luc pulling the Gig  and carrying the Grand Marshall of Idaho’s Oldest Rodeo Celebration!  Luc and I showed in mule and donkey shows, State Fairs and many parades across three western states for much of his early driving career.

Blue Mountain Endeavor was my second driving donkey.  He gave me a lot of heart pounding drives.  He was like the little girl with the curl, when he was good he was very very good… but when he was bad…. OMG! That turned out to be harness and later medical problems. 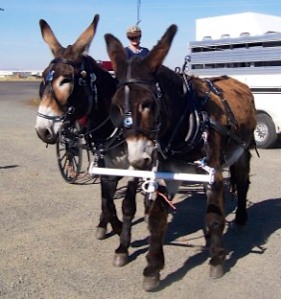 Mas Ass Acres Liberty was a driving gem.  He didn’t always want to go as a single, again it was that same harness that had always given me fits, so he and Dev became my very first team.  I’ll never forget that first team drive with the Robert’s wagonette and a brand new unfitted harness from the local harness maker.  Thank goodness they were donkeys, I don’t think you could make that many mistakes with a team of horses and get away with it.   Erin was my much needed helper, so much of my early donkey driving could not have been done without her!~

OK Sir Galahad was my first trainee.  We took it slow and careful and tried to introduce Galahad to everything he would need to know before that first hitch.  This time it was Robert who was there to help every step along the way.  His first hitch was with Luc as a team to the Pacific Cart.  That was not only Galahad’s first drive but was my first time hitching a team to a two wheeled cart. The miles and the great times with those two have been recorded over and over in the Teamdonk Blogs.  This photo was taken on Galahad’s second drive. 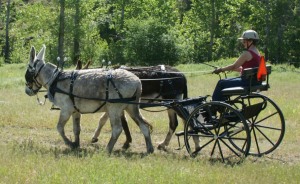 June 2009 marked the purchase of RMS Magical Merlin from Janelle Rieger, Luc’s breeder, who trained Merlin to drive for me.  I started driving Merlin and Hank together in the spring of 2011.  Here they are just four drives into their driving career.

Handsome Hank Bishop came on board and again it was Robert who helped me to convince Hank he really did want to be a driving donkey.  Hank won out in the end and is a happy Therapy Donkey enjoying a life with kids and Fjords in Montana.

This year we begin with Montana’s Alerrt Marshall, who is a trained driving donkey who needed a job.  He will just need a refresher before hitching him with Merlin, who should give him the confidence to get past all the spooks.  These two should be a fun forward moving team. This is our ground driving session the first day we met.

Officially my butt only needs to sit in the box behind a moving team of donkeys for 29.57 miles or approximately five more drives.  What will be the date, who will I be driving, how will we celebrate?  I’m hoping you are here with us as we count down the remaining miles.  Come on summer… let’s get this show on the road!  Remember it’s the journey not the destination, okay just this once it is the destination!

For a larger view of most the photos simply click on them.  Thank you to everyone who has helped with this donkey driving journey, I really could not have done this without you!

5 thoughts on “Counting Down to One Thousand”