In May of 2009 I began driving RMS Lippyluver Luc and OK Sir Glahad, two 56 inch Mammoth Donkeys to a two wheeled cart with a team pole.  I’m often questioned  and sometime confronted about how dangerous this is.  I hope this answers some of the questions.  It is highly unusual but it is not the first two wheeled cart in history put to a team.

Make sure to click on the photos to bring them up to full size.

I have been a long time fan of the Cape Cart  from South Africa.  It’s historical value was to carry folks over long distances and rough terrain, the design was highly successful. http://www.pbase.com/conklink/cape_carts This link will take you to an array of photos of the Cape Cart and the traditional harness.

There was the notorious Victorian Era Curricles, that dashing wealthy young men showed off their driving skills and fast horses when put to a curricle. Not the safest of vehicles but the kind romance novels love to build a story around. 5673 × 3477 – en.wikipedia.org

The Pole Surrey laid the foundation for modern day four wheeled surreys. The Australian Break, which is still used for starting a horse to diving by hitching to an outrigger, are other two wheels carts of historical and modern day value.  The Break is actually a single cart with an outrigger attached, not a pole.  Here is a photo of a more modern day Gig with a top, which I totally love, that was set up as a team vehicle.

I do not  advocate anyone building their own team cart because I feel there are to many forces at work to make them unsafe!  Dealing with a reputable carriage maker is the best way to go in my opinion.  I strongly feel the pole carts Bill Schuil manufactured at Pacific Carriages in Canada were truly amazing and probably every bit as safe as the Cape Carts.

People get excited about Pole Carts thinking it would be a great way to exercise two driving animals at the same time and of course I agree.  Donkeys love being a team, having a buddy to go with them to share the work load is more enjoyable.  So to me it makes sense.  I love the ease of hitching and unhitching and that I am able to manage the carts and go driving alone.
Finding the appropriate vehicle is the tricky part.  There are pole carts  that are great in a show arena or on flat roads, but to find one engineered well enough to go cross country not worrying about flipping over, that is tough.  Over the years I have had a blast trying different  things, like racing around and through hay bales out in a field, I have dented some bale corners and spun a few around that we hit.  Even taking washed out roads where one wheel may be a lot lower that the other one and the same with the donkeys one of top of the washout and the other one down in it throwing everything out of balance. I have had some off road field runaways in the show cart bouncing through deep tractor tracks left over from an early wet spring planting, but still no tip overs… and yet I always think that yes it could and it may happen someday.  That has been the major problem with other pole carts designs.

Instead of a pair of shafts to help the cart stay down on two wheels, the only real connection you have with the pole cart is the neck yoke.  Therefore neck yoke needs to be attached to the pole and not a separate item.  Mine has flex from a leather band that connects the pole to the neck yoke.  When your really think about it that is the same configuration with any team hooked to any sort of traditional four wheeled vehicle.  Another harness option is called a Belly Bugle, that I have tried but without more knowledge, I decided to forego this idea.  I just learned this from Ron Smith, “It works like the second belly-band and prevents the vehicle from over-turning. Tom Ryder discusses it at length in his book On The Box Seat at the end of his pairs section.”

The cart needs to be well sprung and well balanced.  The pole on mine is a heavy gauge aluminum, lighter than a steel pole and easily adjusted depending on the size of the team that I am hooking to, which is extremely important when obtaining the perfect balance. Where and how the pole attaches to the vehicle plays a huge role in how you combat the forces of nature from tipping the entire unit over.  This is where the engineering knowledge of Bill Schuil came into play.

This shows how the pole is attached to the Pacific Gig.  Notice the axle chain draft is still attached for when it is converted back to a single vehicle.

Bill redesigned the attachment and bracing to the first pole we installed on the Pacific Carriage Show Cart as it had a downward slope by the time it reached the neck yoke.  That simple change was enough that I had to learn how to rebalance the show cart as I had some dramatic changes.  Moving the seat helped, but I still cannot take a passenger with me in that vehicle as  a second person changes the balance point, unless the seat is moved to accommodate the weight change. 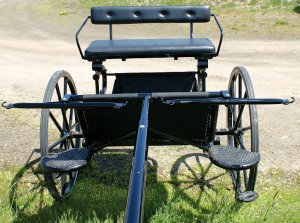 This is the Pacific Carriage Show Cart with the team pole attached.

I have actually side-hilled on steep terrain using a team on the show cart.  As long as I make sure the tallest donkey is on the lower side and I sit on the upper side of the slope all is fine.  The teams and I do a lot of off road driving on uneven ground even at trotting speeds.  I have dropped one wheel into an unforeseen hole or bounced us over a large rock and we still have not had a wheel come dangerously off the ground.  Not to say it couldn’t happen it just hasn’t at this point.  There are some steep drops offs that I take every now and then, if I take them straight on I feel pretty safe, going downhill at an angle is definitely spooky.

It is important in this configuration that your harness is adjusted to perfection!  I cannot get away with anything out of balance!!  If I let one part out, then I have to make about four other adjustments to get everything back into sync. It makes one aware how every part of the harness works with all the other parts! Last season I changed the height of the breeching, in return I had to change the length of the quarter straps, all the way up to the pole strap, then I had to change the back strap and suddenly I had a much more comfortable 60 inch donkey boy who’s harness fit like a glove instead of slopping around on his huge frame, all because I felt the breeching hung to low.  The payoff transmits back to the balance of the vehicle with more pulling power and a smoother ride for me! How comfortable the ride is has a great deal to do with the balanced of the entire setup.

If you drive a two wheeled cart you should be familiar with the term “active seat”, that simply means moving to accommodate weight changes such as climbing a hill, where your weight needs to be slightly more forward.  It is exactly the same with a team put to a pole cart, you lean forward to keep more weight at the end of the pole when hill climbing.  A subtle weight change makes a difference with any two wheeled vehicle.

The Pacific Carriages website had photos of horse teams hitched to pole carts.  From what the photos show they do very well, of course I don’t know their driving habits. All I know is that I have off road tested the Pacific Carriage Show Cart to where I feel secure in it’s ability.  The gig is taller and a little heavier and I am still learning it’s capabilities.  Fortunately Pacific Carriages is now under new ownership, since Bill’s retirement, therefore I am hoping that this design is passed down so others may enjoy a well engineered team cart.   The link continues to be www.pacificcarriages.com   and of course you will find them on Facebook.

These are my thoughts regarding driving a team to a two wheeled cart, I hope I have answered many of your questions.  Of course I always welcome your thoughts on the subject and will do my best to answer your questions.  Happy and safe driving to all whether it is two or four wheeled, multiples or singles, horses, mules or donkeys.

http://www.youtube.com/watch?v=64toQwOtC2w This is one of first videos I took driving Luc and Galahad to the Pacific Carriage Show Cart that shows some of what this blog is talking about.

2 thoughts on “Driving a team to a two wheeled cart”